The ruble's value tumbles in Russia's game of geopolitical chicken

Russia’s budget loses $1bn in revenues from each $4 fall in the price of oil, but the budget gains RUB70bn for each ruble the exchange rate moves above the target rate of RUB65.7 to the dollar
FSUOGM - Former Soviet Union Oil & Gas

The value of the Russia ruble plummeted in the evening of March 8 as trading began, following the price of oil into the chasm created by an oil price war that has broken out between Russia and Saudi Arabia.

A lively conversation broke out on Twitter amongst Russia watchers and leading economists covering the markets of Eastern Europe.

Gideon Rachman, the chief foreign affairs correspondent for the Financial Times, summed up the doomsayers' take in a tweet: “Oil and gas account for 70% of Russian exports and over 50% of government revenues. With oil prices at this level, Putin goes bust.”

Except Rachman’s figures are wrong, or at least very out of date. According to the Russian Ministry of Finance oil currently accounts for about 35% of Russia’s budget revenue and the latest trade statistics from December show that raw materials – including oil, gas, metals, etc – all together account for 53% of Russia’s exports. The importance of share of oil in both Russia’s trade and revenue take has significantly decreased since 2014, when oil prices last collapsed.

As bne IntelliNews has extensively reported, the budget and the tax system has been through a revolution in the last few years. The breakeven price of oil to make the budget balance has dropped like a stone from $115 in 2008 to about $42 now. Estimates of the exact number vary from $40 to $45, but value is complicated by FX effects: as the budget contains oil price assumptions that are denominated in dollars, but the spending is denominated in rubles, the breakeven price varies with the currency fluctuations. In short: if the value of the ruble falls against the dollar, so does the price of oil necessary to balance the budget.

The dependency of the budget’s breakeven price for oil acts as a safety valve for the budget. The collapse of the price of oil to $35 per barrel at the time of writing has dragged the value of the ruble down to an astonishing RUB75 to the dollar from RUB67 before the weekend, and RUB85.7 to the euro from RUB75 on Friday. These heavy falls will go some way towards mitigating the pain to the budget from falling oil prices.

Taking the weaker ruble effect into account this year’s budget would balance at $48 per barrel at an exchange rate of RUB68 to the dollar, says Chris Weafer, CEO of consultancy Macro Advisors. Given the ruble has already crashed through the RUB68 exchange rate the breakeven price for the budget is also tumbling.

“The current rate is RUB74.4 and that brings the breakeven down to below $40 [per barrel of oil],” Weafer tweeted.

Much of the debate over the economic impact on Russia’s economy of $30-crude assumes that the state is still heavily dependent on oil, but most of this assumes that the budget structure has changed little since 2014, when the last oil shock hit. Several economists in the debate are arguing that this assumption is wrong and the Russian economy is much more robust than it was.

“Putin has made promises to people which he can afford to keep with oil in the low $30s and the ruble in the high 70s. Russia has moved on from 2014-16,” Weafer argues.

Russia has been expecting harsh new sanctions from the US for several years and the Kremlin has been working hard to sanction-proof the economy. The Central Bank of Russia (CBR) sold off a large part of its US treasury bill holdings, has been pushing trade partners like China to settle bills in national currencies, not dollars, and revamped both taxes and pension ages to create new sources of revenues.

As bne IntelliNews reported, not only does Russia have enough in reserves – over $570bn as of the end of February – to cover both its entire external and public debt dollar-for-dollar in cash, it now would have over $100bn in cash left over if the Ministry of Finance paid all this debt off tomorrow.

Moveover, the restructuring of Russia’s reserves with their large share of gold reserves and shift away from holding dollars to euros means the panicked reaction of markets to the collapse of the price of oil has brought large windfall gains. The CBR has been buying gold for years when the price was circa $1,300 per ounce and on Monday gold prices topped $1,700. Russia had 2,219 tonnes of gold as of the third quarter of 2019, which was worth $115bn as of January. Given prices are up 30% now that is a windfall of $35bn in just a matter of months.

Things have improved at the corporate level too. The 2014 oil price shock caught most companies off guard and led to “margin calls” as loans they had taken out that were secured by their shares got called in as the share prices fell below a predetermined level. Since then, all the big companies have scrambled to pay off their foreign debts and that process also more or less came to an end last year.

Indeed, you could speculate that the Kremlin has been planning this oil price war for a long while. As bne IntelliNews reported already in 2016, Russia has been actively building up gold as a share of its gross international reserves (GIR) since 2007 and has accelerated that buying in the last few years. However, it eased off buying gold in the last quarter of 2019 as the Kremlin seemed to feel its “fiscal fortress” was complete. Perhaps its is no coincidence that the Kremlin has chosen now to launch its attack by “weaponising” oil prices. 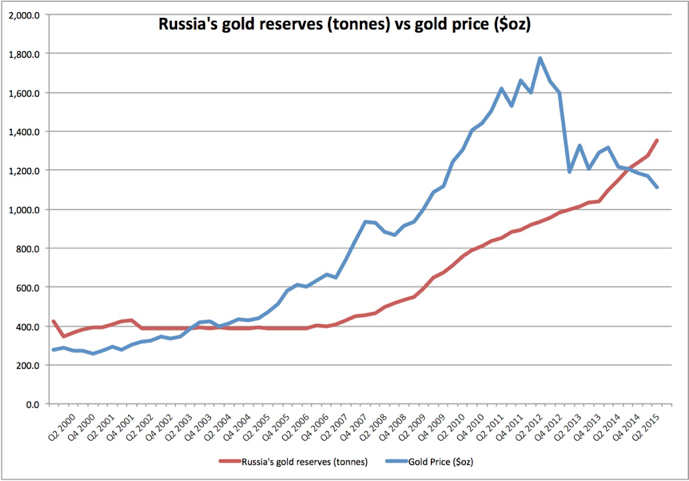 The Ministry of Finance was also gaming out low oil price scenarios in the autumn of 2019 and released a table showing the long-term effects on the economy of oil prices under $40, including 5 years of $30-oil, where the economy would shrink by some 8.9%. But there is no change to the economy with oil at $40, according to the ministry. 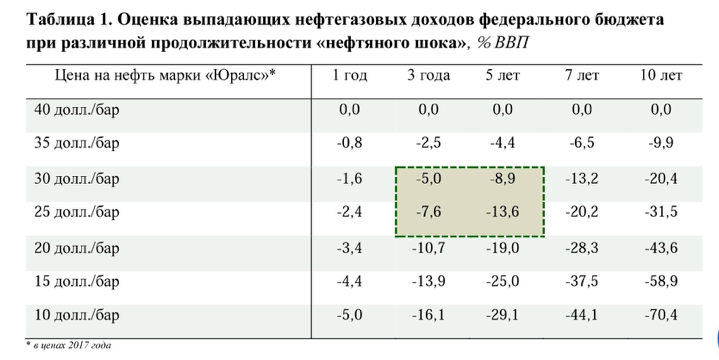 And the Ministry said on March 9 that it was ready to tap the $150bn in the National Welfare Fund (NWF) to support the budget if revenues fell too far. Finance Minister Anton Siluanov said that there is sufficient money in the fund to supplement the budget for up to six years if oil falls to $25-$30 per barrel. Russia’s budget loses $1bn in revenues from each $4 fall in the price of oil, but the budget gains RUB70bn for each ruble the exchange rate moves above the target rate of RUB65.7 to the dollar. That means the ruble’s RUB8 fall over the weekend has already added RUB560bn ($7.7bn) to the budget in just two days.

Even if there is no aggressive underlying motivation, the sanction-proofing of the economy of the last years puts Russia in a strong position to weather the storm of a collapse in oil prices this time round.

Saudi Arabia struck back by further collapsing prices by flooding the European market in particular with heavily discounted oil over the weekend, but with a breakeven price of $85 Saudi Arabia can’t keep up its war for long. If this is a game of chicken then Saudi Arabia is bound to blink first.

“Saudi Arabia has already depleted its financial reserves from $730bn in 2014 to $490bn at the start of this year. It also needs $85 per barrel to balance its budget and, unlike Russia, it does not benefit from the flexible currency. The riyal is pegged to the US dollar,” says Weafer. “Other OPEC producers are in a similarly tough position. Forget 1-2 years. If the oil price is in the $40s, ever mind $30s, later this year then the dynamic will be very different and, for a change, it will not be Russia suffering the most by any means.”

The US shale industry will also be hurt by this onslaught. While the US producers are in a stronger position than Saudi Arabia, most shale production is marginal at $50 oil and if the prices stay low for the rest of this year then many will start going bust – which might be the Kremlin’s game plan.

“Also bear in mind that a lot of the US shale production needs $50 per barrel to be viable, certainly the production brought on in recent years. Much will change in the global oil market with $30-$35 oil for even a few months.

At the end of the day none of the commentators are really sure what is going on. The initial reaction was that it was Russia that launched a price war which is aimed at the US shale industry. But then Saudi flooded the European market and has made the collapse of oil prices worse.

It could be that Russia was simply unhappy with more cuts, as the Kremlin has been under intense pressure by Russia’s oil companies to end the production cut deal, especially by the state-owned oil major Rosneft that is run by Putin’s friend Igor Sechin.

However, it should be noted that Russia walked away from the production cut deal and was fully aware of what affect that would have on oil prices.

It has also been suggested that Russia and Saudi are actually co-ordinating their actions to collapse oil prices in the hope of destroying at least some of its shale production, or that this remains Russia’s main goal.

In the last five years the US “shale revolution” has seen its market share rise from 9% to 17% now, although both Saudi and Russia have managed to largely maintain their own market shares. Saudi was responsible for collapsing the prices in 2014 as an attempt to destroy US shale producers in an effort that largely failed; the US producers responded by cutting costs and increasing their efficiency and the sector escaped largely unscathed. At the same time, it is clear that both Russia and Saudi resent the fact that the US didn't participate in the oil production cuts and has been the biggest beneficiaries of the inflated oil prices it produced: the US got all the gain, and none of the pain, from the OPEC+ production cut deal.

What should worry is it makes little sense for either Russia or Saudi to start price wars. Saudi can’t sustain them because of the pressure they put on its budget. Russia has just launched a major economic overhaul in the form of its 12 national projects and needs cash to pay the circa $400bn bill.

It is possible that the two countries have joined forces to more effectively collapse oil prices and at least make a big dent in the US shale production and so retake some of its market share. Even if this was not the plan, this will probably be one of the outcomes from the current oil shock.

However, for the Kremlin to risk derailing its national project programme and possibly tip the world into a global debt crisis seems like a very big risk to take for the reward of winning a few per cent increase to its market share of the global oil market – especially when it has worked so hard to reduce its reliance on oil in recent years.