Oil imports by China and India from Russia have surged thanks to the sanctions on Russia in May to overtake Germany as Russia’s biggest trade partner.

China’s crude oil imports from Russia were up 55% in May compared to a year earlier, as the chart shows, displacing Saudi Arabia as the country’s top supplier. China imported about 8.42mn tonnes of oil from Russia in May, data from China's General Administration of Customs (GAC) showed against the 7.82mn tonnes of oil from Saudi Arabia in the same period. China has been Russia’s biggest market for crude oil since 2016, reports Aljazeera. 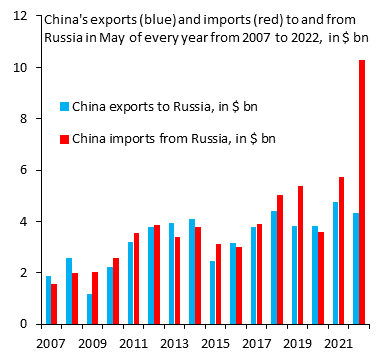 China has been reluctant to become overly dependent on any one country for its oil and has a policy of limiting oil imports from each supplier to 15%, but with Russian oil trading at a 30% discount to the market prices, this has proved irresistible to those countries that have not joined the international sanctions regime. Both China and India are taking advantage of the fire sale in Russian commodities to build up their strategic reserves.

While Russia has stopped releasing details of its external trade, Chinese customs data for May released this week showed that crude oil imports from Russia hit a record level as non-state refiners cashed in on discounted supplies. State-owned refineries have avoided buying Russian oil for fear of being hit by secondary sanctions by the US.

Getting oil to China remains a problem as Russia attempts to pivot away from the West, where the EU is attempting to cut its supplies of Russian oil to zero over the coming years. Almost all of the oil pipeline infrastructure, much of it built in the 1970s, points west with only a few newer pipelines running east to the Asian markets.

The majority of Russian oil deliveries to Asia are transported by ship. Despite the West’s attempt to prevent Russia using international tankers as part of its sixth package of sanctions, exemptions given to Greece in particular, which accounts for half of the tankers used by Russia, have blown a large hole in the effort to hamper Russia’s oil exports by sea.

“Why is Putin cutting gas exports to Europe? The West – reluctant to sanction maritime insurance – has created a monster. The hard currency windfall from the rise in oil prices gives Putin the space to weaponise gas exports. He is swimming in cash. So why not turn the screws,” said Robin Brookes, chief economist at Institute of International Finance (IIF), in a tweet.

“Ironically, the EU – by permitting the massive rise in Greek tankers taking oil out of Russian ports (blue) – is the biggest enabler of this weaponisation of gas exports, by giving Putin the shipping capacity to take his oil to places all around the world,” Brookes added. “Would Putin be turning the screws on Europe if we had sanctions on maritime insurance, stopping oil tankers taking oil out of Russia? No! He'd be battling a currency crisis the way Ukraine currently is, having to hike interest rates and scrounging for every unit of hard currency… By allowing Putin to export his oil globally, we're giving him the means to cut gas exports to Europe. Sanctions on maritime insurance fix this, but the West must be willing to suffer high oil prices temporarily.” 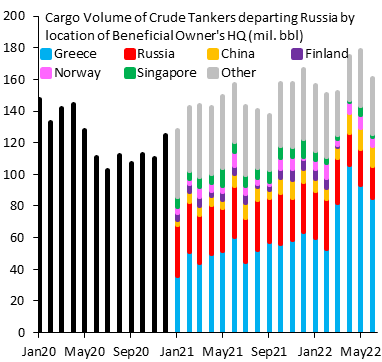 Imports of Russian oil include supplies pumped via the Eastern Siberia-Pacific Ocean (ESPO) pipeline, but that pipeline is already running at close to capacity. Seaborne shipments go from Russia’s European and Far Eastern ports.

The surge in oil exports shows that despite the sanctions, and self-sanctions by traders, Moscow has still been able to find outlets for its oil. Russia’s oil exports have already fallen by 10% so far, and are expected to drop by up to 17% this year, say experts, but production should stabilise at that level and the decline in production and exports is currently being more than compensated by the increase in prices.

China bought $7.47bn worth of Russian energy products in May, which was about $1bn more than in April, according to Bloomberg News.

Sales of crude to India have also surged, albeit from a much lower level than those to China; Russian crude already made around 15% of its imports before the war started, but those to India accounted for under 2% of its crude imports.

India bought six times more Russian oil from March to May compared to the same period last year, data from research firm Rystad Energy reports, while imports by China tripled during that period.

According to the International Energy Agency’s (IEA) latest global oil report, India has also overtaken Germany as the second largest importer of Russian crude in the last two months.

For the first five months of this year, imports of Russian LNG – from mostly the Sakhalin-2 project in the Far East and Yamal LNG in the Russian Arctic – rose 22% on the year to 1.84mn tonnes, according to customs data.