Gas crisis: Can Europe store enough gas this summer to get through the winter?

Russia has drastically reduced gas supplies to Europe. At the current injections rates Europe could squeak through to its 80% full tank target by October, but if Russia makes further cuts then a full-blown crisis is on the cards.
EurOil - Europe Oil & Gas
FSUOGM - Former Soviet Union Oil & Gas

“Winter is coming, and the night is full or terrors.” The Game of Thrones most famous quote would serve well as a morning greeting for gas traders as they come into work.

Russia has drastically cut gas supplies to European customers in the last weeks, raising the spectre of another and even worse gas crisis this winter. As the war in Ukraine got underway in March, the EU ordered that underground storage tanks be filled to 80% by October 1. It’s now not clear if that target will be hit.

Russia’s Gazprom announced on June 14 that it is slashing gas flow via the Nord Stream 1 pipeline by 60%, blaming Siemens’ failure to return compressor units on time that had been sent off for repair, as well as other technical difficulties at the Portovaya compressor station.

Dutch front-month gas futures, the European benchmark, rose as much as 7.7% to a one-week high of €137 ($144) per MWh in Amsterdam. The contracts have gained more than 50% since Gazprom cut flows, Bloomberg reports.

Earlier Gazprom has already cut off Bulgaria, Denmark, Finland, the Netherlands and Poland after they refused to pay for natural gas in rubles, as demanded by the Russian government.

Germany is becoming very alarmed and called the reduction in gas flows an “attack.”

“The reduction of gas deliveries via the Nord Stream 1 pipeline is an attack on us, an economic attack on us,” Economy Minister Robert Habeck said in a speech on June 21 and accused Gazprom of cutting supplies for political reasons.

He went on to say that if Russia cuts off energy to Europe completely then that threatens a “Lehman Brothers moment” that could see the global energy markets collapse completely.

“If [energy company losses] gets so big that they can’t carry it anymore, the whole market is in danger of collapsing at some point,” Habeck said at a news conference in Berlin. “So, a Lehman effect in the energy system.”

The country has already managed to reduce the share of its natural gas supplied by Russia from 55% before the invasion to around 35%, but there are not many easy cuts left to make.

German Vice-Chancellor Robert Habeck has put the country on the second highest energy alert on June 10 and ordered coal-fired stations that were due to be shuttered back on standby, along with Austria and the Netherlands. Another 10 EU countries have issued “early warning” notices of an impending energy crisis, Frans Timmermans, the European Union’s climate chief, said in a speech to the European Parliament.

Germany’s gas emergency plan is based on the 2017 EU regulations with three escalation levels: warning, alert and emergency levels.

The early warning is triggered if there are “concrete, serious and reliable indications that an event may occur which is likely to lead to a significant deterioration of the gas supply situation and is likely to trigger the alarm or emergency stage.”

The alert stage kicks in when these dangers lead a government to actively prepare for a crisis and allows them to enact legislation that will pass soaring costs on to the consumer. In the emergency stage, the government intervenes in the market to divvy up limited supplies through rationing.

Habeck said he was holding off on price adjustments for now to see how the market reacts. “It will be a rocky road that we have to travel as a country,” he said. “Even if we don’t feel it yet, we are in a gas crisis.”

To buy more wiggle room Germany has also launched the “80mn together for energy change” plan (a reference to the size of Germany’s population) to encourage citizens to make energy savings to reduce demand. Industry is bracing for the possible introduction of energy rationing.

Habeck called for the “diversification” of suppliers of raw materials and energy to achieve “a bit of independence from the malign intentions of the world’s dictators.”

Germany has by far the largest storage tanks in the EU and doubles up as a gas hub for other member states. Currently its tanks are 58% full, but that is only enough to cover 2-3 cold months and not enough to get through the winter, according to the Federal Network Agency. Gazprom has cut supplies of gas to 40% of the average and at that rate Germany will be short of gas at the start of the heating season. The record for the lowest level of gas in storage as of October 1 was set last year when European tanks were 77.3% full and that fuelled a major gas crisis that sent prices up 20-fold at their peak.

Europe is actually ahead of the game this year. The EU-wide storage tanks were 55% full as of June 20, as the chart shows, and the injection rate remains well above both of the last two years as well as the average for the last five years, according to bne IntelliNews calculations.

Europe has been rushing to fill its tanks at record rates since the very start of this year, when record amounts of gas were added in just the first few days of January of over 3,000 GWh per day. Since then injection rates have fallen back, but have remained well above the average rates for recent years, as the chart shows.

The rapid refilling of the tanks has been due to record high LNG deliveries, especially by the US that has been supporting its ally in its effort to prepare for exactly the sort of crisis that is starting to unfold. LNG has a technical maximum limit of 140 TWh/month, or 10-15% of total demand, due to the limits on terminal capacity in Europe, and cannot by itself cover all the current shortfall, as Europe needs a total average of 400 TWh/month.

And this is a very expensive solution. Injecting around 700 TWh into EU storages ahead of next winter (about two months' worth of gas deliveries) at current prices would cost at least €70bn, estimates consultants Bruegel compared to €12bn in previous years.

Injection rates into Europe's gas tanks have been rising slowly in recent years from around 1,000 GWh/day to over 2,500 GWh/day, but fell more recently in 2000 to below 2,000 GWh/day when Europe was suffering from a gas glut. That gave way to gas shortages in the next year, but this year has seen unprecedented increases in the injection rate.

Injection rates into the tanks clearly started to fall after reaching a record peak of over 5,000 GWh/day in May, but are currently on a par with the five-year average rate of just under 4,000GWh/day, which is typical for this time of year.

What is different is that usually gas injections remain steady at around 4,000GWh/day throughout June, July and August, after which the cold weather kicks in and gas starts flowing out of the tanks.

In addition to the “technical problems” with Nord Stream 1, Gazprom announced that TurkStream that supplies Southeast Europe will be closed for repairs for a week this month, and Nord Stream 1 is due to be shut down again for a week at the end of July for its annual repairs.

It remains unclear now that gas flows through Nord Stream 1 have been reduced they will be increased again once the maintenance work is over.

This year the injection rates are already plunging deeply and are expected to fall further fast. The injection rate halved on June 22 to its lowest level since early June, according to figures from Germany’s network regulator, Bundesnetzagentur (BNetzA).

But even at that rate, Europe will probably avoid a full-blown crisis. It will take more than 100 days to reach the 80% target, or September 30 – just as the traditional heating season starts on October 1.

If the injection rates recover to the pre-June 14 levels then the 80% target will be hit by about August 21, well ahead of schedule, allowing for the scheduled 10 days of annual maintenance work.

But if Gazprom cuts off supplies completely then Europe will miss the 80% target and be forced to hunt for alternatives like LNG and coal as well as introduce rationing of industry's gas. That will, in turn, lead to an economic slowdown and could spark a global recession or even an energy market collapse.

“Even record-high non-Russian imports would not be enough to sufficiently refill storage ahead of next winter. Europe would need to reduce demand by at minimum 400 TWh (or 10%-15% of annual demand). This is possible. A portfolio of exceptional options could abate at least 800 TWh,” energy consultants Bruegel said in a note.

Some, none, normal – those are the scenarios that have currently captured most of the discussion on the looming gas crisis, but analysts Ben Mcwilliams, Giovanni Sgaravatti, Simone Tagliapietra and Georg Zachmann have raised a fourth scenario: Gazprom squeezes the market in the summer to create a panic and send prices skyward, but then drops the restrictions and floods the market at the end of summer.

“Just imagine what would happen if by the summer, EU gas companies managed to amass close to 1,000 TWh and Gazprom suddenly decides it is time to release the volumes it withheld last year,” the analysts speculate. “Prices would drop dramatically, leaving all those who stored gas – helping Europe prepare for winter – with huge losses. This is a catch-22 scenario.” 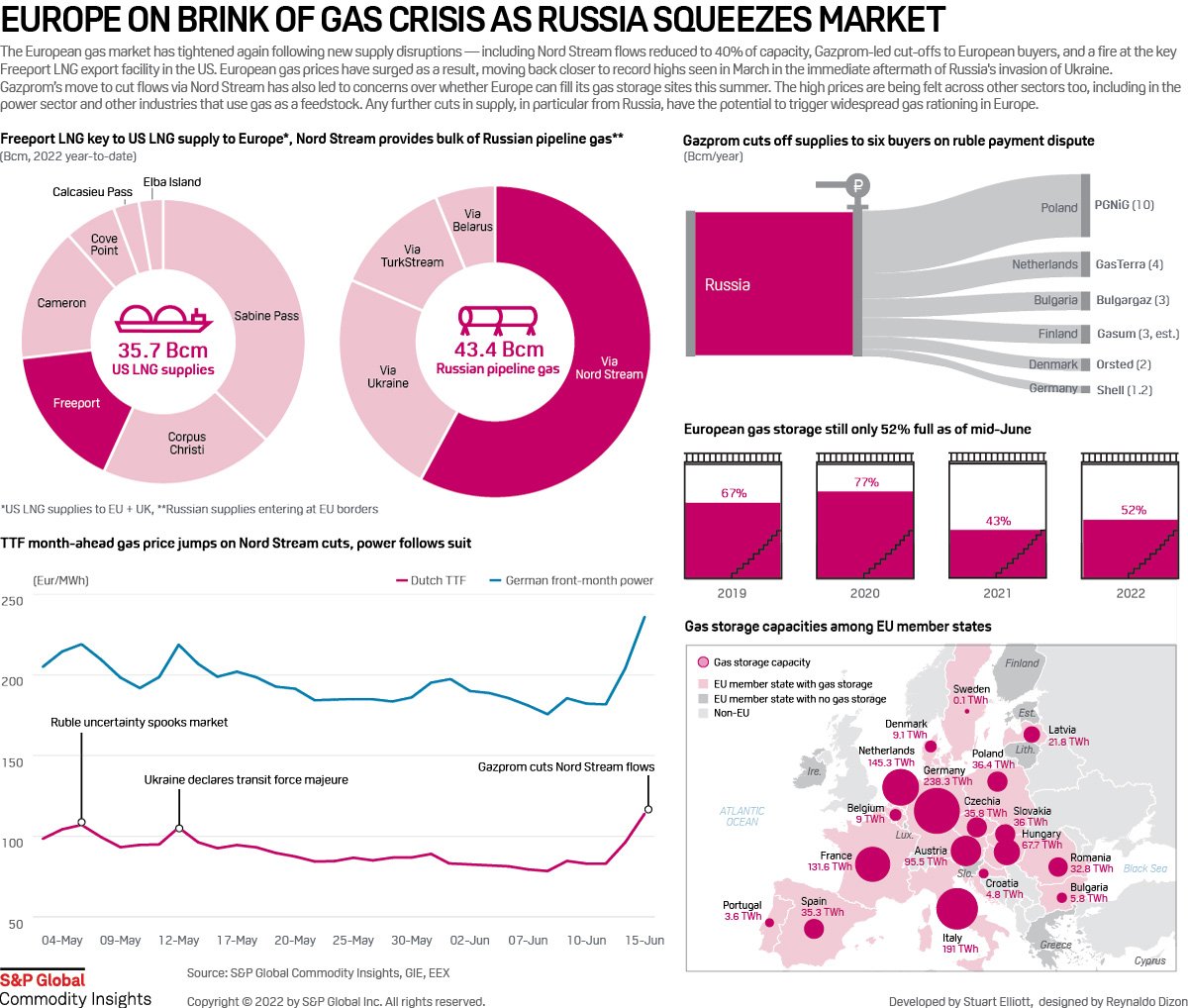