Russia signs off on Paris accord, sets itself an easy CO2 target

Russia has signed off on the Paris climate accords and promised to reduce its CO2 emissions by 70% from the 1990 level, but that is a low bar
AsiaElec - Asia Power
Energo - CEE/FSU Power
FSUOGM - Former Soviet Union Oil & Gas

The Russian government has ratified the 2015 Paris Agreement on combating climate change, committing itself to reducing carbon dioxide emissions to 70% of 1990 levels by 2030.

While that sounds impressive, the target actually means that Russian can increase its CO2 emissions from current levels and doesn't have to reduce them at all.

As the chart shows, CO2 emissions peaked in 1990 in the last year of the Soviet Union and the subsequent collapse of the economy in 1991 as the Soviet Union broke up lead to massive fall in CO2 emissions. By choosing 1990 as the benchmark year, Russia has set itself the lowest possible hurdle to clear in order to comply with the reduction targets imposed by the Paris Accord. 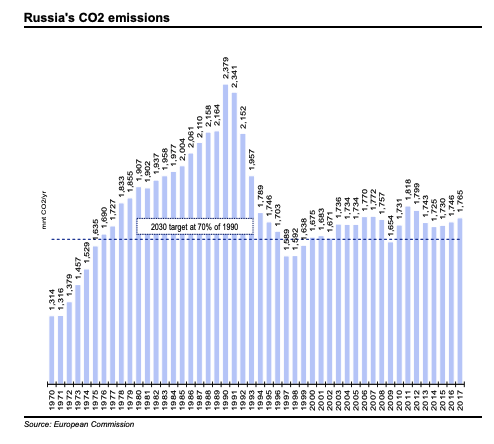 “The Russian Federation has accepted the Paris Agreement and is becoming a full-fledged participant of this international instrument,” Ruslan Edelgeriev, the president’s climate advisor, told the United Nations Climate Action Summit in New York on September 23.

Data from published by the United Nations Framework Convention on Climate Change (UNFCCC) shows that Russia’s GHGs, which include CO2 and other polluting gases, stood at 3.186mn tonnes of CO2 equivalent in 1990.

What this means is that Russia has effectively already met its target, and only needs to maintain emissions at current levels to meet the 2030 commitments.

“Our total emissions over this period have decreased almost by half. This represents 41bn tonnes of CO2 equivalent, which on the planetary scale has allowed [us] to cumulatively hold global warming for an entire year.”

Moscow now has until the end of 2020 to present its new long-term strategy for achieving that goal, said Edelgeriev.

“We have to take account for the fact that the Russian economy is in large part built around carbon-intensive industries,” Edelgeriev said. “Russia needs to become a leader not just in the export of fossil fuels, but also in the export of new technologies and clean energy.”

The government issued a decree to ratify the Paris goals ahead of the New York summit on August 23.

Russian Prime Minister Dmitry Medvedev said: “The threat of climate change is [the] destruction of the ecological balance, increased risks for successful development of key industries...and most importantly, threat to safety of people living on permafrost and increase of natural disasters."

Given Russia’s unique record in lowering emissions, the government’s newfound enthusiasm for climate change and its commitment to the Paris agreement is a political action. The government actually needs to do little to meet its new Paris targets.

Russia, which is currently the fourth-largest producer of GHGs behind China, India and the US, has lagged behind other countries in worrying about climate change.

Russian President Vladimir Putin is known for his lukewarm attitude to climate change and emissions over the last two decades. However, as Bloomberg reported recently Putin has recently done an about face, not because he has been converted to the dangers of climate change, but because he sees it as a way to increase Russia’s clout on the international stage.

Having said that temperatures in Russia are rising twice as fast as in the rest of the world and Russia has recently suffered a series of environmental disasters. In summer 2019, Russia suffered from a series of wildfires and floods, prompting the government to discuss seriously for the first time the economic and environmental dangers of rising temperatures.

And there is change at the corporate level – again not because of any road to Damascus moment, but because equity investors are starting to dump shares of companies that are not paying any attention to their environmental, social and governance (ESG) scores – a new standard of measuring not just the profitability of a company but also the sustainability of its business. Given so many Russian companies are in the raw materials business and heavy polluters their ESG scores are low.

As bne IntelliNews reported in a cover story in September climate change and the expanding global population are changing the way investors think about long-term returns. The prospect of an environmental disaster is changing public perceptions too. The population is becoming more demanding, changing they way they shop and invest. That means Russian companies have started investing billions of dollars to literally clean up their acts.

The change is both a challenge and an opportunity for a company like Sibur, Russia’s biggest petrochemical producer. Corporate governance has already been an issue for Russian companies since the idea was championed by the likes of oil company Yukos almost a decade ago, and the Soviet legacy of blurring the line between work and the private life means Russian companies are also sensitive to social issues. But concern for the environment is new and will take longer to work its way into the Russian corporate DNA. However, the leading companies have already started to invest into clean energy and reducing their emissions.

Whether they are doing enough fast enough remains to be seen, but with the Kremlin having negotiated such a low bar to clear to meet its Paris accord obligations they have time to make the changes.