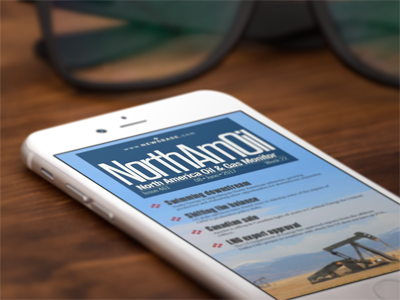 Looking for more NorthAmOil articles? Or would you like to find out more about the publication? Keep reading.

The publication continues to provide weekly coverage of upstream, midstream and downstream news, spanning shale oil and gas, LNG, oil sands, transport by pipeline and rail, company performance and regional energy policy – on both national and state or provincial levels. NorthAmOil provides regular updates on the status of major proposed projects in both the US and Canada. The publication also looks at more distant prospects, such as offshore Arctic drilling.

NorthAmOil is fully digital publication and can be read via PDF, PageSuite or via our NewsBase App.

The majority of our premium content is ONLY available to our subscribers.

If you would like to try NorthAmOil we can offer you a, no obligation, free trial, giving you a chance to get to know the publication and get hooked on the quality content. No credit card required.

The US’ largest oilfield services firms, Schlumberger, Halliburton and Baker Hughes, have all reported a further set of losses for the third quarter of 2020.

Kinder Morgan has received permission from the US Federal Energy Regulatory Commission (FERC) to begin construction on the Acadiana natural gas expansion project in Louisiana.

ConocoPhillips, the largest independent US oil and gas producer, has unveiled a goal of net-zero greenhouse gas (GHG) emissions from its operations by 2050.

Houston-based sustainable infrastructure company Merit SI announced last week that it had completed construction on a solar power plant that will directly help power a compressor station on a natural gas pipeline.

Two further major M&A deals involving US oil producers have been confirmed over the past week as consolidation picks up.

Certain developments in recent days illustrate the scale of ongoing challenges for the oil and gas industry, but various players are forging ahead undeterred.

A handful of liquefaction terminals around the world are dealing with unplanned outages.

ConocoPhillips reportedly in talks to take over Concho

According to a Bloomberg report, ConocoPhillips is in talks to acquire shale producer Concho Resources, with a deal potentially coming in the next few weeks.

Diamondback Energy released an operational update on its third-quarter performance this week. The results show that the company’s production fell slightly on the previous quarter to 287,300 barrels of oil equivalent per day.

Some construction allowed to resume on Mountain Valley pipeline

The US Federal Energy Regulatory Commission (FERC) has given Equitrans Midstream permission to resume some construction on the Mountain Valley pipeline from Virginia to West Virginia.

US oil and gas operations recover from latest hurricane-related outages

Oil and gas production was coming back online in the US Gulf of Mexico this week following the latest weather-related disruptions, this time caused by Hurricane Delta.

Alberta’s oil output remains below what it was prior to the COVID-19 pandemic and the path forward looks increasingly challenging for the province’s producers.

The Permian Basin is set to experience a net decline in production this year and does not need as much pipeline capacity as anticipated, but it is exporting more gas to Mexico and deliveries may continue to increase.

Houston-based NextDecade announced last week that it would be targeting carbon neutrality at its proposed Rio Grande LNG project in Brownsville, Texas.

Oil prices and energy demand are under pressure on both sides from storms, COVID-19 outbreaks and climate concerns.

An LNG cargo was shipped from Sempra Energy’s Cameron LNG terminal in Louisiana on October 5, the first since it was shut down in response to Hurricane Laura. However, the terminal is now being shut again ahead of Hurricane Delta.

Chevron edges ahead of ExxonMobil to become largest US oil company

Chevron has overtaken ExxonMobil to become the US’ largest oil and gas company by market capitalisation. Chevron was valued at $142bn on October 7, edging ahead of ExxonMobil at $141.6bn.

The closing of Chevron’s acquisition of Noble Energy comes as M&A activity in the US energy industry appears to be picking up.

North American midstream player TC Energy has proposed buying all of the shares of TC PipeLines, an indirect subsidiary and master limited partnership (MLP), that it does not already own.

Suncor to cut up to 15% of workforce

Canada’s Suncor Energy has unveiled plans to cut its staff numbers by up to 15% over the next 18 months.

Any questions? Please get in touch

"NorthAmOil and LatAmOil from NewsBase provide the data and informed comment to keep us up-to-date on industry developments in our core areas.  Other reports, studies and opinion-pieces on more diverse topics stimulate awareness beyond that immediate focus – and ensure we don’t become myopic or boring.   These subscriptions are a great investment."

Find out more about the benefits of a NewsBase subscription