Maduro is still in office despite everything, and fellow Trump foe Iran is only too glad to help keep him there.
EurOil - Europe Oil & Gas
MEOG - Middle East Oil & Gas

It has all the makings of a cheap thriller. An Iranian tanker loaded up with fuel has set sail for Venezuela. The government of moustachioed strongman Nicolas Maduro, desperately short of gasoline thanks to the wrecking effects of US sanctions, is said to be paying Iran in bars of gold for the emergency shipment. My enemy’s enemy is my friend, thinks Tehran, and is only too keen to help. But US President Donald Trump needs to deliver a foreign policy victory as he steps up his campaign for re-election in November. Dislodging Maduro would do nicely. What action might he take?

If the US had any respect for international law—and under Trump, essentially described this week by China’s official mouthpiece media as unhinged given his rantings and ravings over his coronavirus dilemma, it patently doesn’t—the range of moves the White House might countenance could be rationally gauged. But to Trump, academics agonising over precedents past and present can go take a running jump, thus the tenterhooks developing over the Iran-Venezuela situation. Even many top officials in the Trump administration are said to have been left gobsmacked by the Commander-in-Chief—or Prostitute-in-Chief as US presidential challenger Joe Biden might have it given his remarks this week on Trump’s “prostitution of that office”—going ahead with the drone-strike assassination at Baghdad airport of Iran’s de facto military chief and second most powerful official Qasem Soleimani in January. 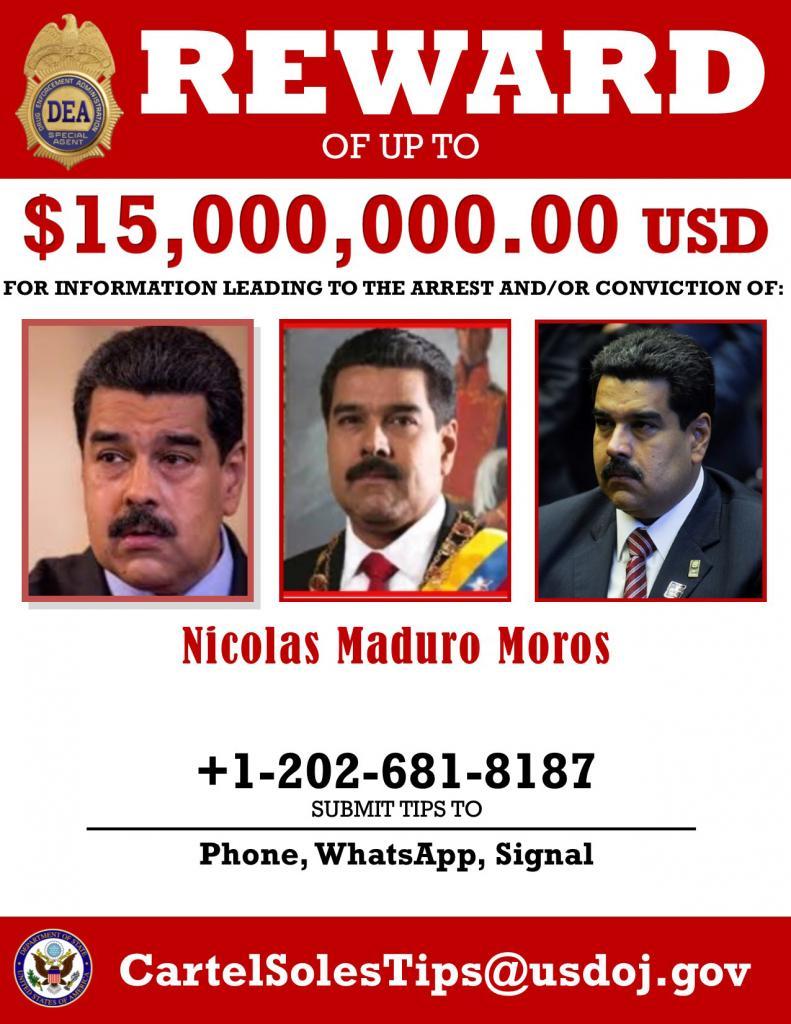 The US has charged Maduro and 14 current and former Venezuelan officials with narco-terrorism, corruption, drug trafficking and other criminal charges, citing an alleged plot to use cocaine as a weapon to “flood” America (Source: US Drug Enforcement Administration).

Reuters on May 14 cited a senior Trump administration official in reporting that the US was considering measures it could take in response to Iran’s shipment of fuel. The US has a “high degree of certainty” that Maduro’s government is paying Iran “handsome” tonnes of gold for the fuel, they added. “It is not only unwelcome by the United States but it’s unwelcome by the region, and we’re looking at measures that can be taken,” the official said, speaking for other countries probably without so much as putting in a phone call, as the Trump set-up is wont to do (to take two rude examples, Iraq was not consulted on the Soleimani assassination and Europe was not given any forewarning of the flight ban imposed on EU flights to the US as Trump realised he wasn’t actually going to get anywhere close to “zero” coronavirus infections in America any time soon).

The official also reportedly declined to specify the measures being weighed but said options would be presented to Trump.

There is no doubt that Venezuela under President Maduro is in a mess and that US sanctions have helped dump it there. There’s an acute shortage of fuel and reports of crops rotting in the fields and medical personnel unable to get to work given the lack of public and private transport that that is causing.

Venezuela has the largest oil reserves in the world and Iran the fourth largest, but Venezuela’s refining industry infrastructure is pretty much in ruins amid the country’s economic crisis and the crude exports of Iran have, according to some analysts, dwindled to a record low in the face of a US sanctions squeeze designed to entirely force them off world markets.

Refinitiv Eikon vessel tracking data showed on May 13 that at least one tanker carrying fuel loaded at an Iranian port has set sail for the embattled South American country. Iran-flagged medium tanker Clavel on that day passed the Suez Canal after loading fuel at the end of March at Iran’s Bandar Abbas port. Four other vessels of the same size as the Clavel, all flagged by Iran and loaded with fuel at or near Bandar Abbas, are about to cross the Atlantic Ocean after passing Suez and were yet to set their final destinations, the data also showed. The smart money is on all four of these tankers also being bound for Venezuela.

The Clavel shipment steps up visible cooperation between Iran and Venezuela. Since April, several flights from Tehran have delivered materials to Venezuela that Iran said would help the country restart the catalytic cracking unit at its 310,000 barrel-per-day Cardon refinery. The flights were conducted by Mahan Air, an Iranian airline long on Washington’s sanctions list for activities including the alleged delivery of weapons to so-called Iran-aligned terrorists in Middle East conflict zones such as Syria. On learning of the flights, US Secretary of State Mike Pompeo called on countries to deny overflight rights to Mahan Air. He said it was delivering cargoes of “unknown support” to the Venezuelan government.

As well as Iran, Russia, China and Cuba back Maduro staying in power despite claims his 2018 re-election was a sham. US officials have briefed media that Trump is increasingly frustrated by the fact that Maduro has clung on despite everything thrown at him. The Bad Guy is yours to choose. Let’s hope he gets his comeuppance.