Fitch Ratings has cut its short and medium-term oil and natural gas price assumptions in expectation of very large market oversupply in 2020.

“We assume the market will gradually rebalance in the next two to three years, but we have also trimmed our long-term assumptions to reflect continued efficiency gains, low break-even oil prices of many greenfield projects and a potential for demand to slow due to energy transition,” Fitch said in a note to subscribers.

Some economists are predicting that the series of “stop shocks” following the crash of oil prices in March and exacerbated by the coronavirus (COVID-19) pandemic will tip the planet into a global recession of -0.5% this year, although there is still no consensus on just how bad things will get. 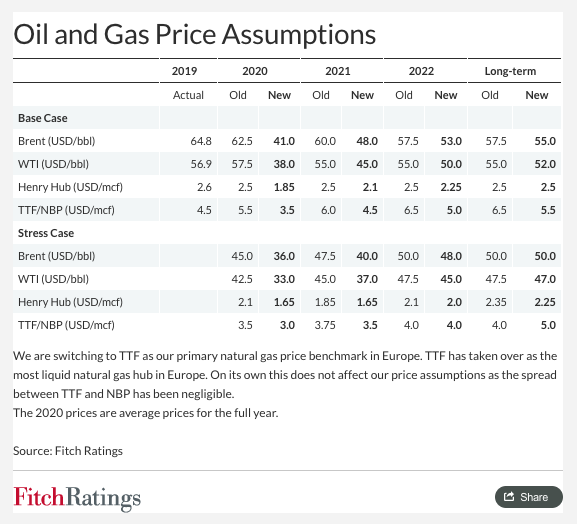 Massive oil oversupply in the works

Fitch estimates the crude oil market will be “massively oversupplied in 2020,” because of waning demand due to the coronavirus outbreak and growing production following the OPEC+ failure to agree on output cuts.

“Saudi Arabia intends to increase production from April and utilise its significant spare capacity. This could keep the Brent price below $40/bbl for the rest of this year, as the magnitude of oversupply in 2020 in various scenarios is likely to be much larger than the maximum of 1mn barrels a day (bpd) seen in the past decade,” Fitch said.

Fitch is more upbeat about the medium term and expects the market to rebalance over the next two or three years due to a recovery in demand once the coronavirus outbreak is contained, as well as the impact on the US shale production, which will slow at low prices. At the same time the agency suggested the OPEC countries will eventually cut production again to boost prices within the foreseeable future as their economies will come under pressure if prices stay too low for too long.

Both Saudi Arabia and Russia, the key parties to OPEC+, have fiscal break-even Brent prices above current market prices, at $91/bbl and $53/bbl respectively, according to Fitch.

“We expect US shale production to return to growth when oil prices stabilise, as happened in 2016-2017, which would limit the extent of the price recovery,” says Fitch.

Natural gas markets are also vastly oversupplied, says Fitch. Europe in particular faces a gas glut following the unusually warm winter and the large supplies of gas in storage as a result of a gas war between Russia’s Gazprom and Ukraine’s Naftogaz over the renewal of the transit deal that was averted at the last minute in December. And thanks to the warm winter the gas glut extends beyond Europe.

“Current prices in Europe and Asia rarely cover the half-cycle cash costs (that include variable operating costs and transport to Europe) of natural gas and LNG suppliers, including Gazprom and US producers, and are therefore unsustainable,” Fitch said. “We assume the Dutch TTF and UK NBP gas prices in Europe will gradually recover to $5.5/mmcf over three to five years, broadly corresponding to the full-cycle costs of US producers, including shipping to Europe and capex. We assume the US Henry Hub price to recover to $2.5/mmcf in the long term.”

But gas prices will remain low in the meantime over the next two years, according to Fitch, due to weak demand for LNG in China, high volumes of gas in European storage and commissioning of new LNG capacity, albeit at slower pace than in 2016-2019.

“Our ratings will be driven by issuers' expected credit profiles in 2020-2023 (assuming their liquidity remains sufficient), rather than when prices trough. This is in line with our "rating-through-the-cycle" approach,” says Fitch. “We do not anticipate that this revision of oil and gas prices will trigger portfolio-wide negative rating actions, but we will assess the credit impact case by case. High-yield issuers are more exposed, particularly those with high liquidity and refinancing risks, given tough capital and asset sale markets.”