NEWSBASE: The attacks on Saudi oil infrastructure are the oil industry's 9/11

The attacks on Saudi oil infrastructure could turn out to be the oil industry’s 9/11. Reacting to the news analysts from JP Morgan said: “Clearly oil assets have been massively mispriced. The assumption that production facilities are secure is wrong. They are all vulnerable to attack and production is not secure.”

The immediate impact of the bombings, allegedly carried out by Iranian-backed Houthi based in Yemen, is that it has shaved at least half a trillion dollars off the mooted IPO of Saudi Arabia’s Aramco that the Kingdom was hoping would list with a market capitalisation of some $2 trillion dollars.

For Saudi Aramco, the timing of the attack is a disaster, coming just after it had sought to take control of the narrative surrounding its planned IPO and bail the Kingdom’s finances out in the process.

Having replaced Khalid Al-Falih as Energy Minister and Aramco chairman in the last two weeks, Riyadh was setting the stage for a complete focus on the listing. But now the float will be in disarray as investors scramble to reassess the risks to Saudi oil production. Was the attack a one off, or the start of a sustained campaign by Saudi’s enemies? The atmosphere is similar to the shock caused by the Al Qaeda terrorists flying planes into the iconic Twin Trade Towers 20 years ago and striking a blow in the heart of New York that left the US reeling.

It is still not clear who ordered the attacks, but the US has been quick to point the finger at Tehran. In 2001 the US was also quick to act and within months had sent its military into Afghanistan, the de facto headquarters of Al Qaeda in the hope of capturing or killing Osama bin Laden. The possibility of targeted US missile strikes against Houthi strongholds in Yemen or even a retaliation against assets in Iran are on the cards as both the Saudis and the Americans are out for revenge, wrote Ariel Cohen in Forbes. The war on terror has been extended into the energy sector and America’s credability as a global policeman is on the line.

“Washington needs to clarify that Iran cannot win the escalation domination game in this conflict, and Iran’s strategic assets and high-value regime targets, including its nuclear program and the oil export facilities, will be at stake. The U.S. and its allies have an overwhelming air, naval, missile and, if necessary, ground forces superiority in the region. Nothing less than the future of the global energy supply and America’s economic well-being is at stake,” Cohen said on September 15.

An estimated 4% of Aramco stock was supposed to be auctioned internationally, with 1% to be sold on the local stock exchange. However, with the oil concession not included in the listing, doubts had already been raised about the shares’ valuation, which will be further depressed now.

The target price eventually arrived at for the 5% of shares in Aramco was expected to value the company at around $1.5tn, though Crown Prince Mohammed bin Salman (MBS) has previously said he believes the firm is worth closer to $2 trillion. The proceeds from the Aramco listing are due to go to the Public Investment Fund (PIF) to be used to help the flagging and heavily oil-dependent Saudi economy.

While the attacks may end up not resulting in a major change in Aramco’s valuation, several industry sources told Middle East Oil & Gas (MEOG) that they will come as a wake-up call for potential investors who had perhaps not factored in sufficient geopolitical risk.

There are reports of others who have suggested that the added risk could reduce the valuation by as much as $500bn. MEOG sources suggest that MBS would be very reluctant to accept a valuation of $1 trillion and the IPO would probably be scratched in this case.

The next few weeks will be crucial for the company as it needs to quickly restore some investor confidence. Production can be resumed in weeks, according to Aramco, but there could be longer delays before full production is resumed, which would unsettle investors.

And clearly security will be significantly beefed up. Al Qaeda previous tried to attack the facilities at Abqaiq and failed. Now investors will be asking themselves how 10 projectile-carrying drones could fly more than 700km into Saudi territory and not be detected.

Like in 2001 there will be a lot of soul searching and recriminations once the initial shock has worn off. That will be followed by a major restructuring of Saudi Arabia’s security arrangements and will certainly include some sort of retaliation against claimed perpetrators.

The lasting effect will be to further undermine the security of the region and inflame tensions further. Unlike 9/11 where a small group of terrorists targeted innocent civilians, an oil sector 9/11 will set government against the international energy sector and that could have far wider consequences for the global economy. 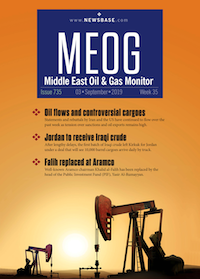 This article is from Newsbase’s Middle East Oil and Gas monitor, a bne IntelliNews sister company that produces weekly reports on the oil and gas sector in the Middle East.

Newsbase produces a family of newsletters that cover the energy sector worldwide. It is a premium service that you can take a free month’s trial of by sending an email to subscriptions director Stephen Vanson.