The International Energy Agency (IEA) reports that oil demand this year will grow by 1.9mn barrels per day, to a record 101.7mn bpd, and supply by 1mn bpd, to 101.1mn bpd, in its first monthly report for 2023 released on January 18. Russia’s federal budget is already under pressure from tumbling oil and gas revenues but with a bit of luck a rise in oil prices in the second half of this year could take some of the pressure off.

The oil market has already been hit by the oil price cap scheme and EU embargo on the import of Russian crude that went into effect on December 5. It will receive a second blow when a similar two-speed embargo and price cap regime is introduced by the EU on February 5 that will further affect supplies. However, oil prices for Brent rose to $85 after the IEA released its report on January 18.

So far, the EU ban on crude has led to a fall in Russia’s exports of crude as international tanker companies shy away from Russian oil, afraid of secondary sanctions. The discount on the Russian Urals blend of oil has also blown out to almost 50% against the benchmark Brent blend.

However, analysts speculate that these changes in price and volume will be temporary while the market and Russia find new routes and customers for its oil products. A similar thing happened in the first months of the war in Ukraine where Russian exports fell as traders avoided buying the Urals blend and the discount increased then as well. However, after a few months traders in Asia – in India and China in particular – stepped in to buy the very cheap Russian oil driven by market forces. Analysts assume that something similar will happen now, but where the export volumes and prices will settle remains a matter of debate.

The IEA predicts that there will be a turning point in the international oil market in the middle of this year. The latest IEA's Monthly Oil Statistics report including October 2022 data shows that for the main areas within the OECD:

In the first quarter, the IEA predicted an excess of oil on the market of about 1mn bpd, but in the second that figure will decrease significantly. By the third and fourth quarter, demand will already exceed supply by 1.6mn and 2.4mn bpd respectively, pushing up prices, The Bell reports.

Just when the inflection point arrives will depend on two factors: the speed of China's economic recovery and the reaction of Russian production to the EU embargo on petroleum products.

The IEA is not optimistic about the prospects for the Chinese economy, but nevertheless predicts that China will account for almost half of the global growth in oil demand (850,000 bpd) in 2023, and will outstrip India.

If the recovery turns out to be stronger than the forecast, "the cushion of stocks in storage will disappear very quickly," said the head of the IEA, Fatih Birol, in the latter’s latest oil bulletin.

Russia remains the “dark horse” in this year’s oil outlook, as it is not clear how it will respond to the new sanctions due in February. In December, production decreased slightly to 11.2mn bpd, but the consequences of the embargo on petroleum products, which are much more widely distributed in Europe, will be much more severe, the IEA says. Currently the agency is forecasting a decline in production of 1.6mn bpd in the first quarter and of 1.3mn bpd to 9.7mn bpd on average for the whole year compared to 2022, The Bell reports.

Russian President Vladimir Putin has already lost the winter energy battle with the West thanks to record imports of LNG and an unusually warm winter. Birol believes that Russia will also lose the wider energy war with the West starting with defeats in the coming quarters in the expanding oil sanctions war, and even more so in the coming years as Europe remakes its energy supplies. It will become increasingly clear that India and China will not be able to entirely replace Russia’s European customers, the IEA believes.

On the same day the world's largest oil company, Saudi Aramco, released its outlook for 2023. It also hopes for a Chinese recovery and predicts additional demand for jet fuel, pointing to a shortage of new production of 4mn-6mn bpd.

After the IEA’s forecasts of record demand, the price of Brent rose above $87 – the level of early December – before falling back to $85 by the close of trading.

For Russia the price of Brent is critical for the budget. The introduction of the crude embargo has already seen Russian budget revenues tumble in December to end the year with a 2.3% of GDP deficit, almost all of which was due to a collapse in Urals oil prices in December. For 2023, the government is now forecasting that the deficit will widen from around 2% to 3% as a result of the changes in oil and gas revenues expected this year.

Currently it’s not unclear how the price of Urals will be affected by the new sanctions after February 5, but it is obvious that Russia cannot replace Europe with new customers for all oil products it currently exports there. Russia will have to reduce both refining and oil production as a result. Domestic experts consider $40 per barrel as the level that will cause severe problems for the budget and in December-January, Russian oil already approached this level. However, Russia’s budget revenues may be rescued by the inflection in demand in the second half of the year, which could push oil prices up sharply. 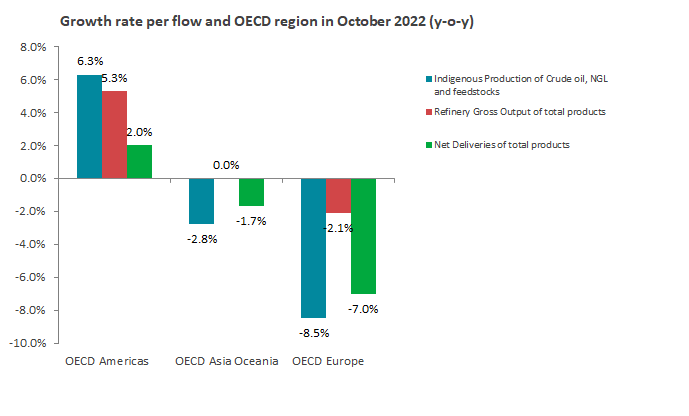